Worldwide consumer spending and first-time installs of mobile apps climbed to $33.6 billion and 35.7 billion, respectively, across Apple's App Store and Google Play in the third quarter of 2021, preliminary Sensor Tower Store Intelligence data reveals. The mobile market has experienced continued lift during the ongoing pandemic, although year-over-year growth has slowed since the initial surge in adoption and spending in Q2 2020 at the onset of COVID-19. This quarter, consumer spending climbed 15.1 percent Y/Y from $29.2 billion in Q3 2020, about half of the 32 percent Y/Y growth seen last year.

Overall consumer spending on in-app purchases, premium apps, and subscriptions grew 15.1 percent Y/Y to $33.6 billion from $29.2 billion, trailing the growth experienced in the first half of 2021 when compared to the same period in 2020. The growth was driven mainly by Google Play, which saw consumer spending grow 18.6 percent Y/Y to $12.1 billion from $10.2 billion.

Although Apple's App Store saw more modest growth, it saw higher consumer spending as in previous years with revenue climbing 13.2 percent to $21.5 billion from $19 billion. As in prior periods, consumers spent about 1.8 times as much on Apple's marketplace when compared to Google's. 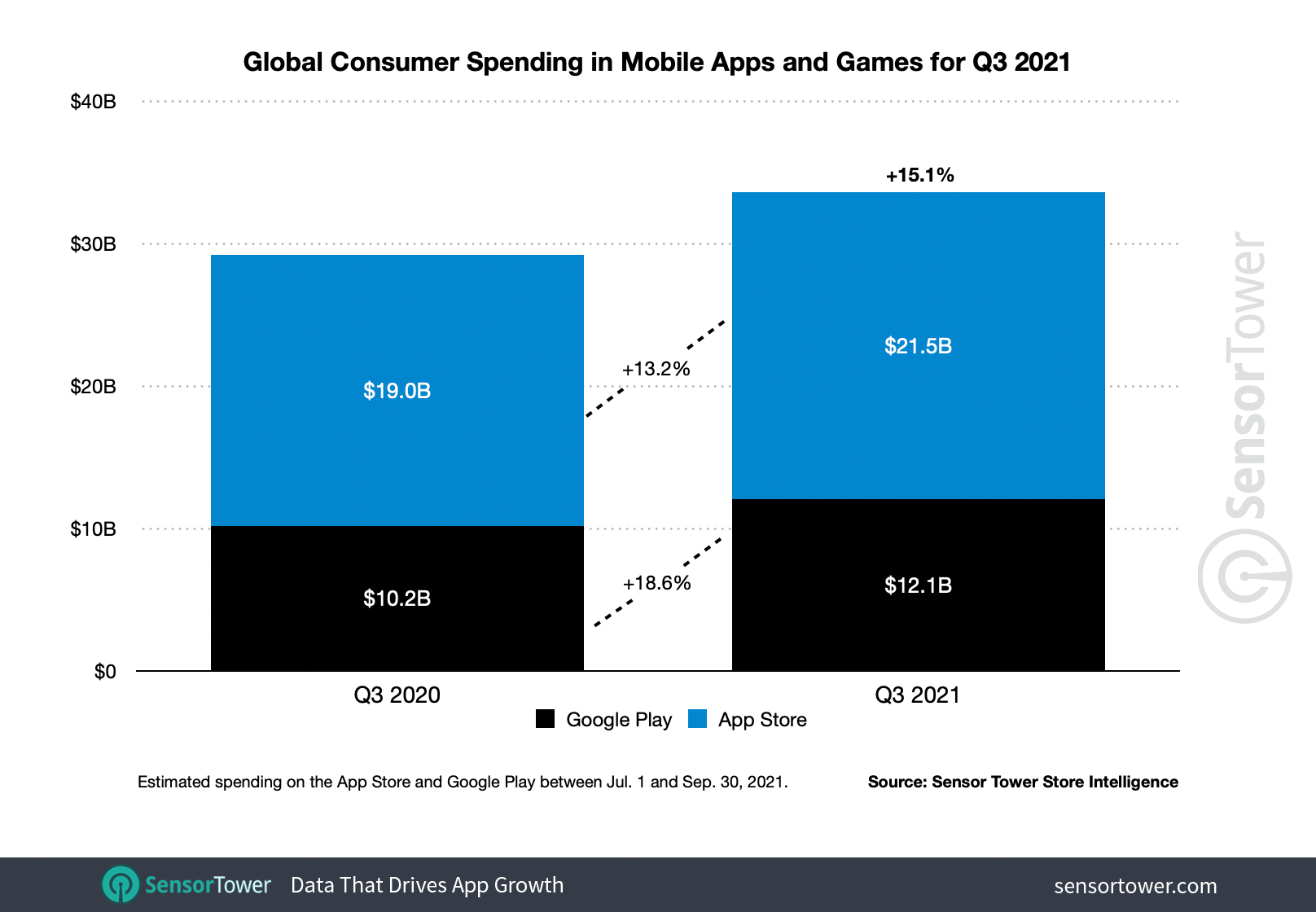 TikTok continued its reign as the highest-earning app across both stores globally in the third quarter of 2021. Consumer spending in the app, which includes Douyin on iOS in China, experienced 41 percent Y/Y growth. Although TikTok was the top-grossing app overall and on the App Store, Google One was the highest earner on Google Play.

Manga reader Piccoma climbed to No. 2 with its revenue growing 130 percent Y/Y, followed by YouTube, which saw consumer spending climb 17 percent Y/Y. Google One and Disney+ rounded out the top five overall apps at No. 4 and No. 5, respectively. 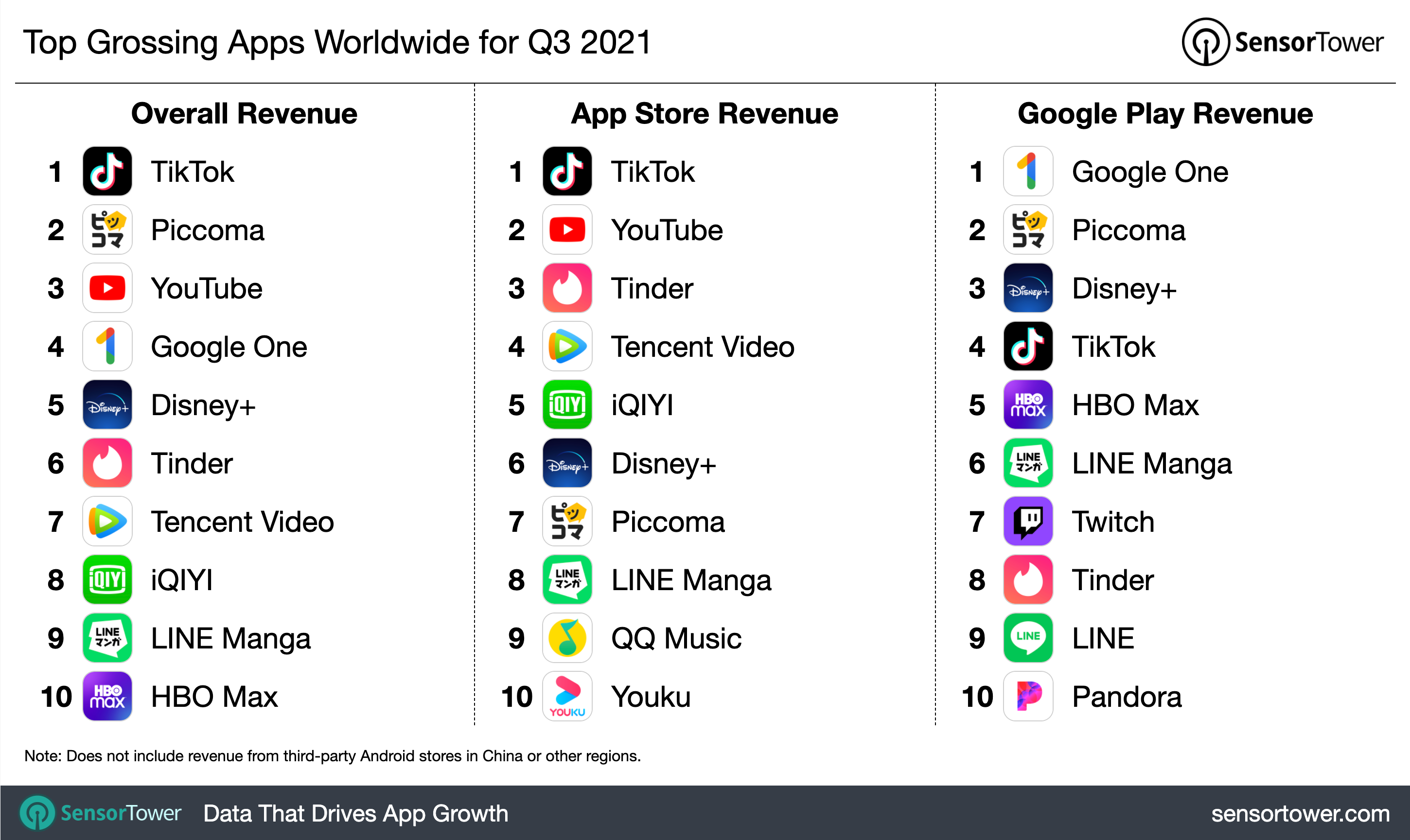 Across both stores, installs declined 1.9 percent to 35.7 billion from 36.4 billion in Q3 2021. Unlike in H1 2021, this was true on Google Play as well as on Apple's App Store—in the first half of the year, Google's marketplace saw Y/Y growth in app adoption, perhaps due to the prevalent use of Android devices in areas of the world still drastically affected by COVID-19. However, as vaccines become more widely available, that trend may very well have begun to normalize.

According to Sensor Tower estimates, first-time app installs in 3Q21 declined 1.2 percent on Apple's App Store from 8.2 billion to 8.1 billion. Google's marketplace saw a decline of 2.1 percent Y/Y from 28.2 billion to 27.6 billion. 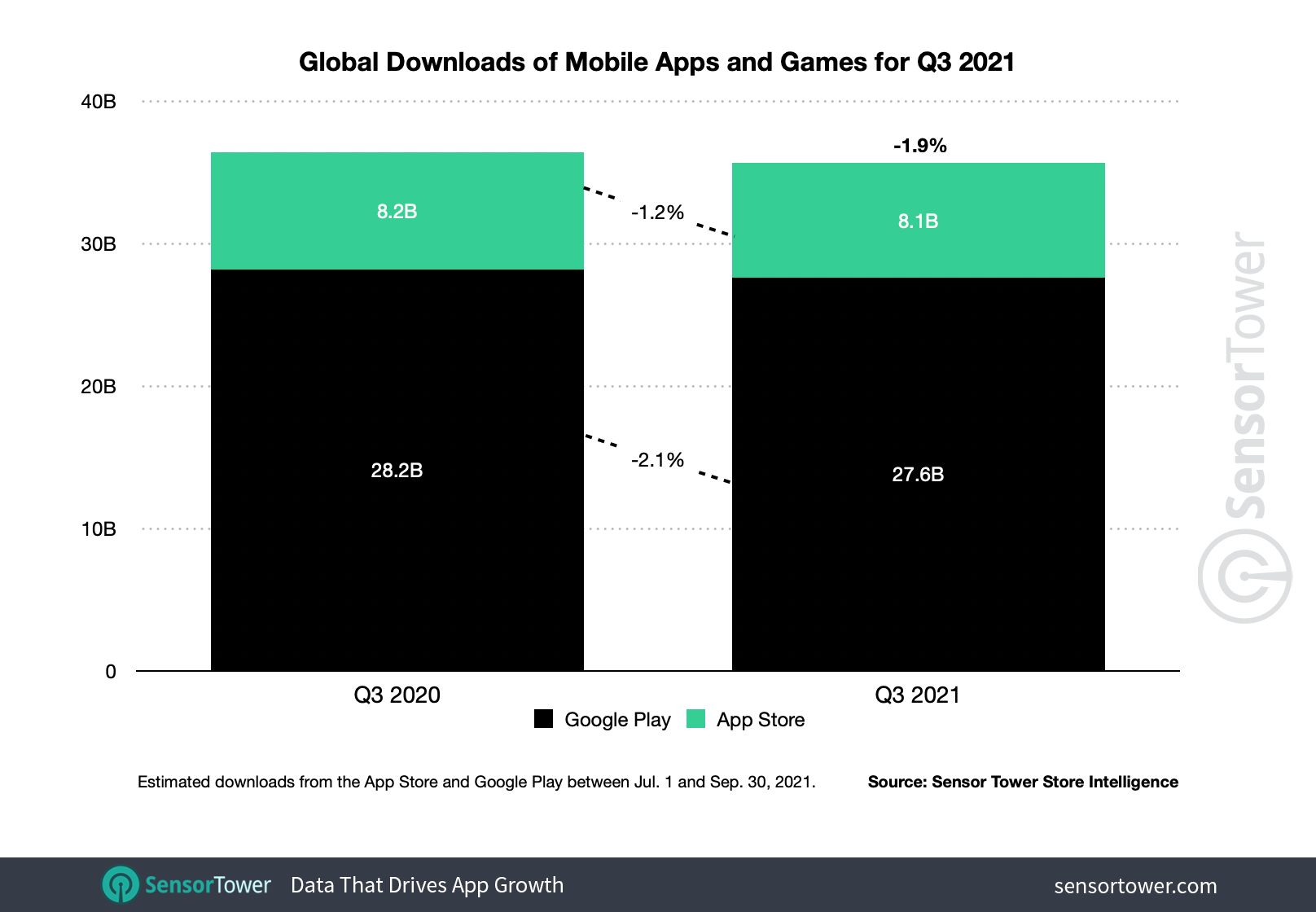 ByteDance's TikTok recently crossed 3 billion installs globally, becoming the first non-Facebook app to do so. Reflecting this continued success, the app topped charts with the most installs across both stores in 3Q21 with about 1 percent growth Y/Y. 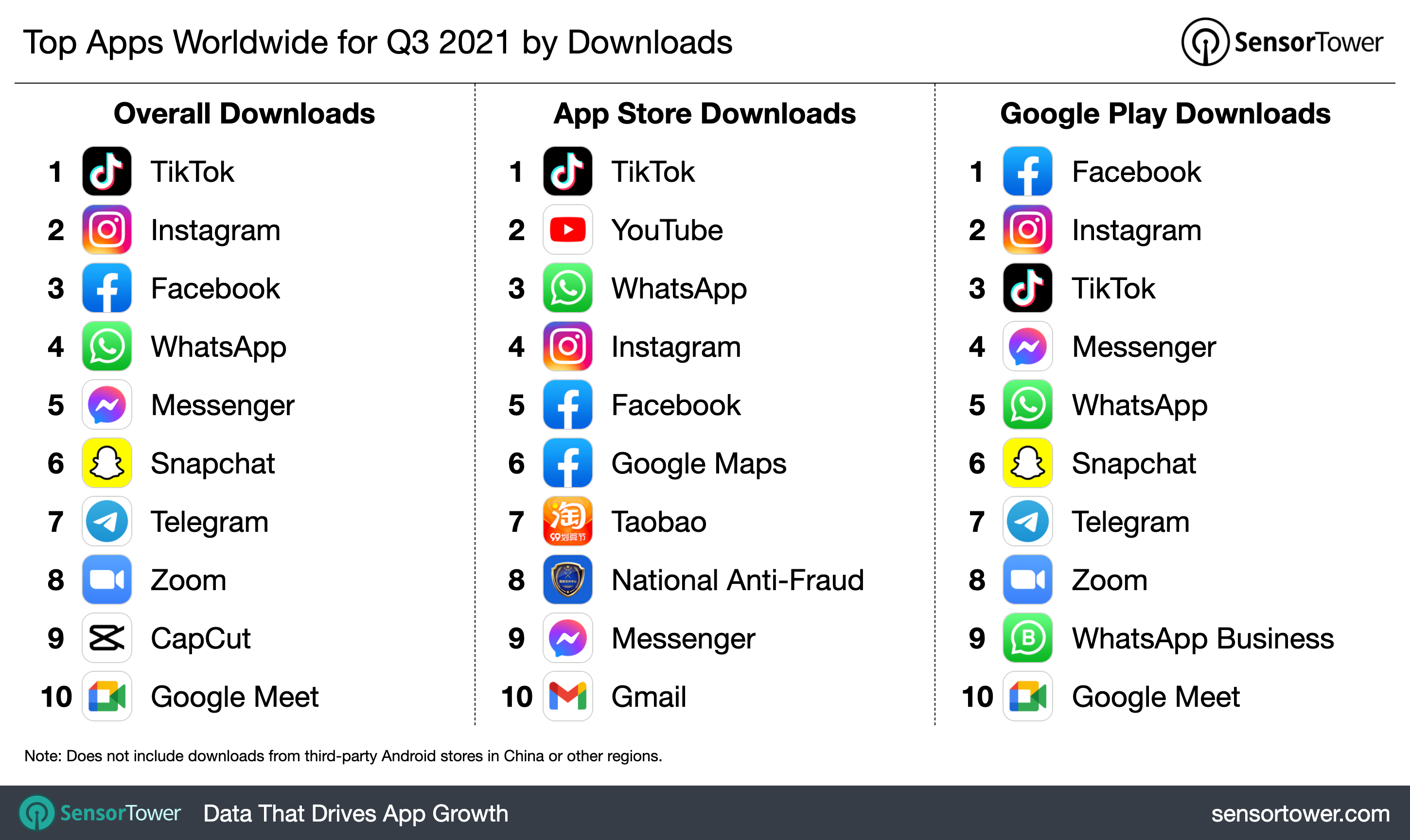 The remainder of the top five most-downloaded apps belonged to Facebook's portfolio, with Instagram and Facebook ranking at No. 2 and No. 3, and WhatsApp and Messenger placing at No. 4 and No. 5, respectively.

Although consumer spending in mobile games continues to climb, the growth experienced by the category has begun to normalize. The Y/Y growth seen in 3Q21 trailed the 17.9 percent Y/Y growth in 1H21. 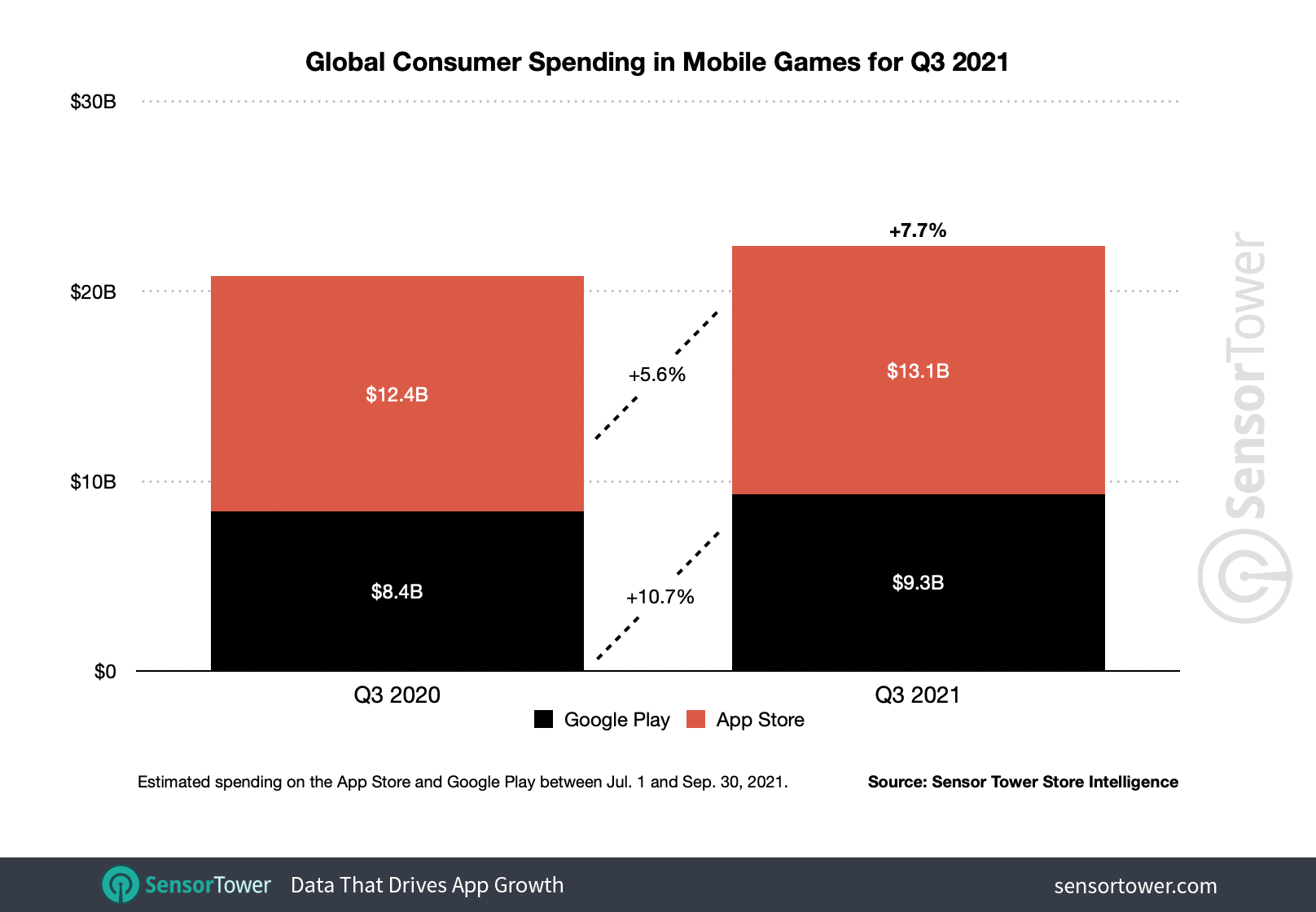 Tencent's PUBG Mobile, including its Chinese localization Game For Peace, maintained its spot as the top grossing mobile game globally after passing $5 billion in lifetime earnings in Q1 2021. In the third quarter, consumer spending in the game climbed 11 percent Y/Y. 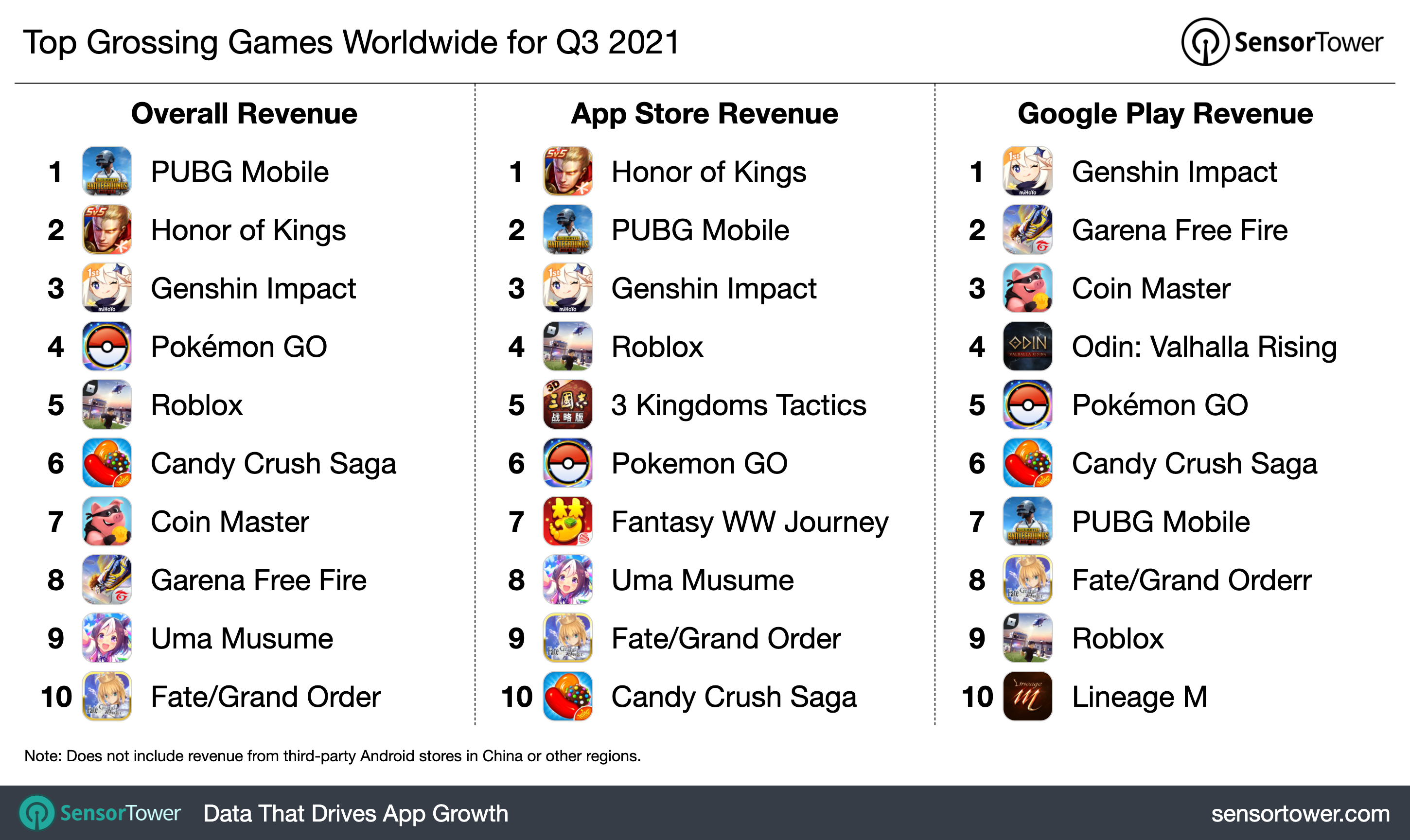 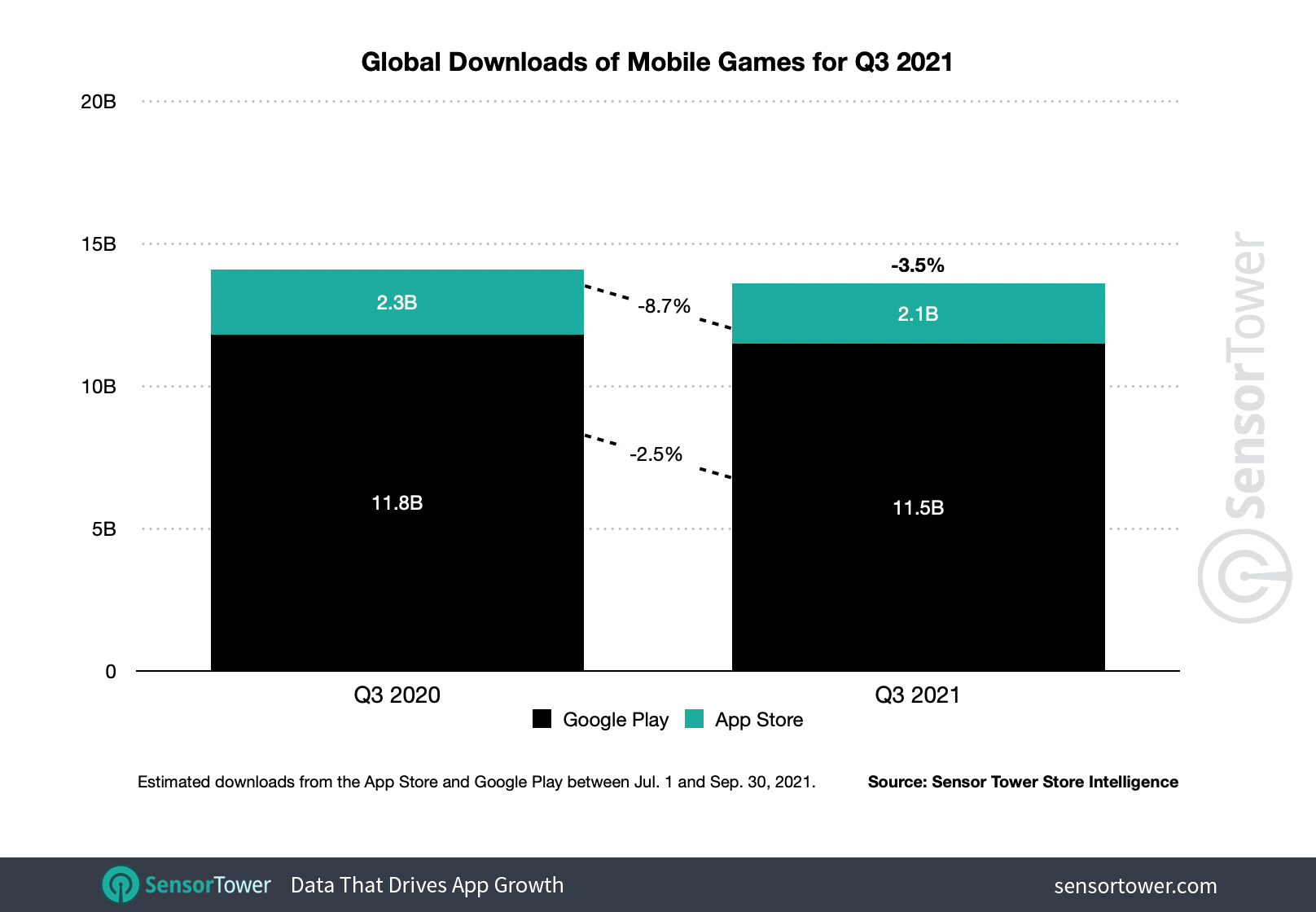 First-time installs of mobile games were also down compared to the year-ago period, declining 3.5 percent to 13.6 billion across both stores from 14.1 billion in 3Q20. Following the trend in the first half of the year, Apple's App Store saw a more significant decrease in adoption with mobile games falling 8.7 percent to 2.1 billion from 2.3 billion. Google Play also saw a downturn in mobile game adoption, declining 2.5 percent to 11.5 billion downloads in 3Q21 from 11.8 billion. 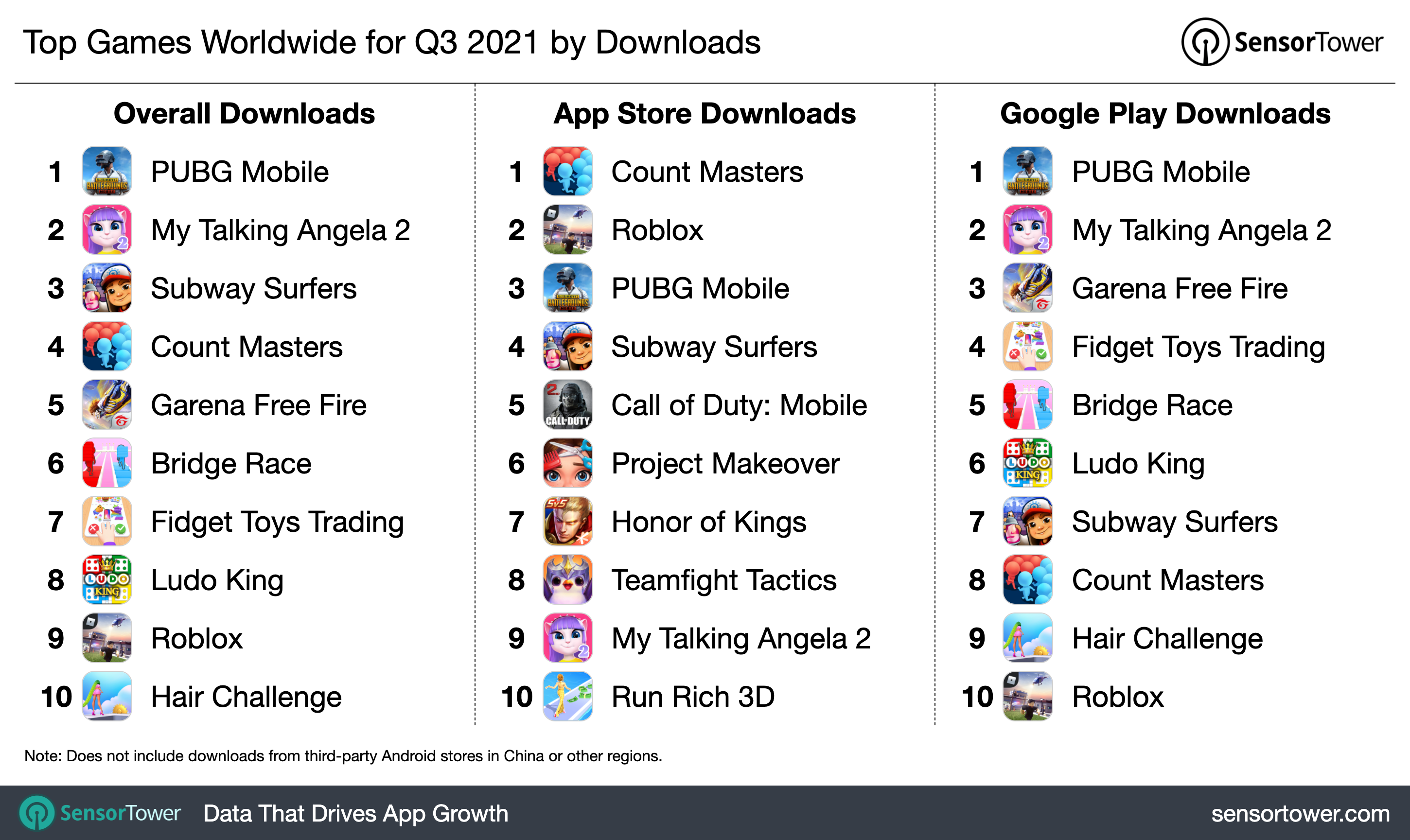 Along with being the top-grossing mobile game in the third quarter, PUBG Mobile also saw the most installs, followed by Outfit7's newly launched My Talking Angela 2 at No. 2. Sybo Games' Subway Surfers made a surprise appearance at No. 3 despite launching more than nine years ago in May 2012, perhaps due to its new Las Vegas World Tour 2021 content update. Tap2Play's Count Masters and Garena's battle royale Garena Free Fire placed at No. 4 and No. 5, respectively.

Sensor Tower's Pathmatics data revealed that the top five highest grossing apps in 3Q21 spent more on digital ads in the past quarter compared to the year-ago period except for Facebook. TikTok led the cohort, spending nearly $23 million on digital ads with a heavy emphasis on social platforms. This was up 113 percent Y/Y compared to its digital advertising spend of $10.8 million in 3Q20.

Although Facebook's digital ad spend decreased Y/Y in the third quarter of 2021, it spent the second most on advertising after TikTok. In 3Q21, the app devoted about $6.3 million on digital ads, half of the $12.6 million in the year-ago period.

Although the COVID-19 pandemic is ongoing, the mobile market has seen some normalization in the last three quarters. However, recent developments such as the outcome of the Epic v. Apple case in the U.S. and shifts in China's mobile gaming policies may very well affect the marketplace in unexpected ways. Some of the trends that emerged in 2020—such as increased use of Business category mobile apps with the proliferation of remote work—are also continuing to impact the mobile market.

Our full report on global app adoption and consumer spending in the third quarter of 2021 is coming soon and will include further analyses of top publishers, apps, and trends across both Apple's App Store and Google Play.

Note: The revenue estimates contained in this report are not inclusive of local taxes, in-app advertising, or in-app user spending on mobile commerce, e.g., purchases via the Amazon app, rides via the Lyft app, or food deliveries via the DoorDash app. Refunds are also not reflected in the provided figures.